Caleb is the last child the player will encounter, appearing at 3:00 AM and onward. Caleb is rarely seen in comparison to his other siblings, due to the fact that he moves almost entirely underground. Caleb, when visible, looks much like a mummified child with empty eye sockets. He lacks his nose and lips, and has uncharacteristically intact hair. Caleb also has a bizarrely low amount of events that he is involved in.

Caleb has very simple behaviour in comparison to the other children, but is equally dangerous. Once Caleb has entered the map he cannot be stopped. He will begin to slowly, but steadily move towards the player underground, and the player must constantly be moving to avoid being caught. The player can hear digging sounds and see dirt flying if he is near. When Caleb is too close, the player can hear his vocalizations which consist of hissing moans, whispers, and cackles. Because Caleb only moves through the ground, he cannot follow the player into set locations such as the bus, wood shed, and bridge.

Being too close to his digging will result in him suddenly coming to a stop. He will explode out of the ground a small distance away from his trail of turned up dirt. If the player is near enough to him, he will initiate his death animation by jumping and roaring in the player's face. If the player manages to be just far enough away when Caleb emerges, they can witness him roaring towards the sky or sniffing the air. Then he will "dive" back into the ground, and continue the chase by re-spawning somewhere else on the map.

He will scratch the player once with his claws. Then he will either do one of the following:

Caleb is the only child shown attempting and succeeding at cannibalizing the player upon killing them.

Caleb has filthy hands and feet from digging and has long, sharp yellow nails. His bones appear very prominent under his skin, and he lacks eyes, a nose, and the majority of his lips and cheeks. Caleb's hair is the most intact part of his body. He wears scraps of a decayed white shirt and jaggedly cut brown shorts.

Caleb is the most decayed of the children with his entire body taking on a mummified appearance. This shockingly different appearance to the other children is both a reflection of his subterranean lifestyle and the fact he was most likely buried alive, maybe even mummified due to him being wrapped in cloth.

It is possible to avoid Caleb once he emerges from the ground. It is a simple matter of running away as fast as possible. If the player succeeds at this they will earn the Dig THIS! Steam achievement.

After Trophy or Shoe is picked up

In No Way Out, Caleb will become active only when TBubber picks up either his shoe or trophy from the last grave. Caleb will still pursue the player under the ground, forcing the player to keep moving. He also has some new tactics under his metaphorical belt. Sometimes his digging will not cause the dirt to be disturbed, leaving the player with no way to know exactly where he is. There are times where Caleb will sprout from the ground far in front of the player. If he notices TBubber, he will actually run towards him. However, if TBubber stands still or moves far enough away, Caleb will go back into the earth and the player will be safe for the time being. It is important to note that with Caleb's enhanced mobility, he is now capable of pursuing the player into places he was previously unable to access, such as the bridge.

Caleb has new ways to kill the player in No Way Out:

In No Way Out, Caleb has many bloody wounds that reveal muscle and bone, such as the slash marks on the right side of his chest and the many cuts on his face. His face has skin, but is mangled to the point that his features are unidentifiable. Although he still lacks eyes, his sockets are not completely empty and show bloody tissue within. He also lacks most of his hair, and his teeth are pointed. His shorts are blue-gray instead of brown.

Caleb Weaver was the middle child of the Weaver family, being 9 years old when he disappeared. In the newspaper it lists him as 9, his brother Benny as 14, and their younger sister Lillian as 5. There is no mention of Tim and Tom, whom may be their possible siblings.

Caleb was known to go to church with his mother Mary Weaver and brother and sister quite frequently. He had been an athlete as depicted in the newspaper evidence, and the trophy collectible provides further proof of his athletic success. In the trophy's description it states that Caleb won first place in the 220 Yard Dash that took place in 1922. He also went on to winning four track events in Fairfield during spring.

In No Way Out, Journal Page 29 is obtained once the player places one of Caleb's items. The page explains that he was the youngest son of the Weavers' and evidence such as ribbons and trophies had been found to support the fact that Caleb was an athlete. A poem is also found taped to the bottom of the page, and its contents hint towards the possibility of Caleb being killed by Mary, as it says that "my mother killed her little son". There's also the possibility of Lillian having cared greatly for him, the poem including "my sister loved me best of all". If the poem holds any worth, she may have buried him, as it depicts the sister "took my bones that they might lie, underneath the juniper tree".

In the audio for this journal page, there's a man that is perhaps John Weaver speaking to someone. John strictly tells the person he is forbidden to go into the woods and that he may be strong and fast, but no one can run from "this". The "this" in question is unknown. Caleb is the one most likely being spoken to, as this is his journal page and he was known for his ability to run well.

It is very possible that Caleb's death is tied to some sort of mummification and burial. His appearance is very mummified and ghastly, and he has pieces of pale cloth wrapped around his frame which resemble what mummified bodies found throughout history would be wrapped in. His tactic of hunting the player provides further support for this theory: he tunnels underground.

Sound of a young boy running and panting. Something falls to the ground. Shoveling sounds begin as the boy continues to breathe heavily.

Main Location: Behind the middle grave in the Graveyard.

Lillian: Run run, as fast as you can, can't catch me I'm the Boogeyman!

Main Location: On the bridge.

John Weaver: I won't let you go into those woods...I forbid you! You may be strong and fast, but none of us can run from this!

After placing one of Caleb's items: the shoe or trophy.

Animation of Caleb attacking the player.

Caleb having just emerged from the ground.

Side view of Caleb.

Caleb just about to slash the player.

Caleb leaping out and at the player

Caleb in the ending

Caleb looking towards the player

Caleb in the No Way Out trailer.

Caleb in the No Way Out trailer.

Caleb jumping towards the player

Caleb about to poke out TBub's eyes.

Caleb can chase the player by foot.

Animation of Caleb rushing towards the player

Caleb featured in the "Dig THIS!" achievement image.

Promotional image for No Way Out.

Caleb's signature from the bus.

Caleb in the Photograph evidence.

Official page of Caleb for No Way Out

Early concept art of Caleb's drawing depicting himself and Sam. 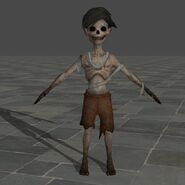 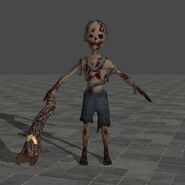 Caleb's No Way Out Model Extracted

Wick and No Way Out Caleb Slashes the Player

Wick and No Way Out Caleb Takes A Bite

Wick No Way Out Caleb Pokes Out The Eyes

Wick No Way Out Caleb Takes Many Bites

Community content is available under CC-BY-SA unless otherwise noted.