Lillian Weaver is the second enemy the player will encounter in Wick. She will become present as early as 1:00 AM, but can still affect the gameplay while not present. Lillian was five years old before her disappearance. She is the only child known to float/fly.

Lillian is capable of influencing the player without actually being present. Most notably, she possesses the ability to teleport the player if they stay in an area for a relatively long period of time. In her active hours, she will constantly taunt the player with little quips and insults, or sometimes will blow out the player's candle and laugh. She will occasionally make herself visible by teleporting directly in front of the player in a similar fashion to Tim and Tom.

When Lillian is on the attack, she always manifests the same way: she will rise from the ground surrounded by soot and green fire. Sometimes a little spin will be done before she roars, and will often manifest like this right in front of the player. Unlike the other enemies, she is always seen floating with her feet off the ground. While hunting the player, she sways from side to side, almost to the beat of her chase theme, and can be heard sobbing while on pursuit. When in Lillian's general proximity, all colors except for shades of red are sucked out of the protagonist's vision, creating an aura of grey.

Looking upon Lillian at any point in time will cause her to instantly speed up to the player and kill them.

Lillian has red hair that she sweeps to the right side of her face under her hood. Her skin is a chalk white colour and does not appear to be decayed. Her cheeks and nose are pink, and her eyes are pure black with small white pupils. Black tear-streaks trail down her face and she has some scratches on her face. She has the smallest stature of all the ghost children.

Lillian wears pink rabbit-themed pajamas. Specifically, it's a pink hoodie that has rabbit ears and a rabbit face with big red buttons for eyes on the hood. The hoodie has a white round tummy with three red buttons to fasten it, and she has a fluffy cotton tail on her behind. She wears purple pants, tube socks rolled up all the way, and rabbit slippers with similar ears and eyes as the hood.

When Lillian kills the player, her eyes go totally white and many veins enlarge in her face, creating a distorted image.

There is only one Lillian-themed achievement titled The Rock Of "Nope" in which the player must survive Lillian near the large rock where the rabbit skull is found.

After Honey Bunny, Skull, or Bucket is picked up

Lillian's tactics remain the same from the main game, save for one new ability. She will initiate a "game" with TBubber where she will count down from 10 and if TBubber fails to hide, Lillian will promptly kill him. To hide, the player must enter either the wood shed or bus. Winning this game earns the player the Hide 'n' Seek achievement.

In No Way Out, Lillian's face is mutilated to resemble a stuffed rabbit. The button eyes that were a part of her rabbit outfit are sewn onto her own. Her nose is missing, exposing the bone underneath. String has been sewn into its place. Her upper lip is split. Blood is trailing from these wounds, as well as staining her clothes and hands. Her hair is white and her rabbit pajamas are blue instead of pink. Her hoodie is missing half of the left rabbit ear.

Lillian Weaver was the youngest child of the Weaver family as well as the only girl. She had four older brothers: Benny, Tim, Tom, and Caleb. Her parents were John and Mary Weaver. She lived on Mount Todd with her family in the early 1900's.

In the News Archive evidence, she is described as "precocious" by the locals. She would go to church every Sunday with her mother, Benny, and Caleb. Judging by her clothes and rabbit doll "Honey Bunny", she had a strong affinity for rabbits. A photograph from when she was alive shows her with her siblings in their Halloween costumes, hers being that of a rabbit.

Besides her doll, Lillian's other keepsakes include a well bucket and a rabbit skull. Her relationship to these two items is not entirely clear. They seem to tie her to the well and the large rock, the latter being significant in that there is an achievement where the player must encounter her at this specific location.

On June 4, 1924, a mysterious fire destroyed the family home and killed Mary. John killed himself in the wood shed. Lillian, Benny, and Caleb went missing, and not even their bodies could be found. Their spirits now haunt the forest.

Lillian's exact form of death is unknown, but often theorized as some sort of drowning. Her floating ability resembles swimming and her legs kick as if treading water. Her well bucket and the fact that Honey Bunny is described as "moist" by TBubber also prove strong connections to her drowning in the well. This line of thought was explored by Duncan and TBubber, on Journal Page 21. However, they note that the police had searched the well and did not find her, nor anyone's remains. Honey Bunny is also noted for being covered in bloodstains, another possible clue to her death.

As a ghost, Lillian is the most talkative of the children, constantly berating her victims. She recites many nursery rhymes as well.

On Halloween night in 2014, Travis "TBubber" Burton enters the children's woods to investigate the Wick legend. He takes their keepsakes and places them throughout the map, most likely angering their spirits, including Lillian. Just when TBubber thinks he is leaving scot-free, Lillian, Benny, Caleb and Tom ambush him. He runs into the Counselor's Cabin where he is killed by an unknown assailant. His body is never found.

In 2015, Sam enters the woods to play Wick. At 6:00 AM, Sam finds himself rotten like a zombie. The Weaver children made him his own grave. Lillian, being held by Benny, holds out her open hand to Sam, as if welcoming him into their group. His remains are never found.

Lillian: Jack and Jill went up the hill to fetch a pail of water. Jack fell down and broke his crown. Jill came tumbling after.

Main Location: On the Bridge.

Sounds of the rabbit squealing before it's skull is crushed with a cracking noise.

Main Location: On the Rock.

In-Game Description: Old child's toy. Appears homemade with many crude repairs. The letter L is monogrammed on the underside.

Main Location: On the Well.

Stay Away From Her

Lillian: My mother said, I never should, play with g*psies in the wood. If I did, she would say, naughty girl to disobey.

After placing one of Lillian's items: the rabbit skull, honey bunny, or bucket.

Lillian's voice is featured in these items:

Lillian: Ring around the rosie. Pocket full of posie. Ashes ashes... we all fall dead.

In-Game Description: Infant size metal leg brace similar to those used to treat children with polio in the early to mid 1900s.

Main Location: Under the bridge.

Lillian: Ladybug, ladybug, fly away home. Your house is on fire and your children are gone.

Main Location: Sitting on the stove in the Wood Shed.

Spawns on fourth grave. Activates Benny once picked up. Place in main location.

Lillian: Run run, as fast as you can, can't catch me I'm the Boogeyman!

Main Location: On the bridge.

Lillian floating a distance away from the player.

Lillian shortly before killing the player.

Lillian's face during her death animation.

Lillian as she appears during her Jumpscare.

The appearance of the forest during Lillian's chase sequence.

Lillian with Benny in the ending

Lillian has a slightly different look after the No Way Out update.

The new teleporting effect that appears in both Wick and the No Way Out expansion.

Lillian floating around a tree

Lillian about to disappear

Lillian's appearance in the montage trailer for WICK

Lillian's jumpscare in the montage trailer for WICK

Lillian in the No Way Out trailer.

Lillian's jumpscare in the No Way Out trailer.

Lillian rushing towards the player

A close-up of Lillian

Lillian's visual effect in No Way Out

Lillian running towards the player

Lillian in the achievement icon for "The Rock of Nope".

Lillian's signature on the bus.

Lillian's signature in the Counselor's Cabin.

Lillian in the photograph evidence.

The Official Page for Lillian In No Way Out. 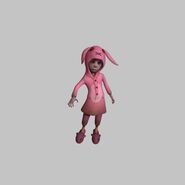 Wick and No Way Out Lillian Does a Little Spin

Wick and No Way Out Lillian Screams In Your Face

Wick and No Way Out Lillian Screams and Walks Away

Wick No Way Out Lillian Runs

Lillian's chase theme in No Way Out:

Community content is available under CC-BY-SA unless otherwise noted.