Tom is either the 3rd or 4th child that is encountered, appearing at 2:00 AM and after. Tom is a mangled mess of a human being who's body somewhat resembles that of a child in his early teens. He is the twin brother of Tim. He wears a white broken mask with a harsh frown carved into it along with a tattered schoolboy uniform.

Tom behaves in a very bizarre fashion, defying logic in a number of ways. Like Lillian and Tim, Tom will toy with his victims by briefly teleporting directly in their line of sight. This also causes the player's vision to glitch, which applies to all the times Tom is looked at for too long.

Tom makes constant reminders of his presence when he is active on an hour, such as being seen in the player's peripheral vision. His footsteps can be heard while walking, which is similar to what Tim does; however, Tom's steps are much faster. Players can also sometimes hear Tom's sudden gasping and choking noises.

In all of Tom's attacks, the critical thing players must do to survive is not look directly at him. To indicate that the player is looking at Tom too much, he will let out a distorted scream and cause the player's vision to glitch. Once the player has looked at him long enough, Tom will initiate a death animation by rising from the ground and floating at an incredibly fast speed towards the player, or simply lurch towards them.

Tom can be seen disappearing in a cloud of green fire if the player is able to avoid him.

Tom, being the twin of Tim, looks very much like him but there are many key differences in his appearance.

Tom has messy, dark brown hair with a right part. His bangs cover his mask's right eye. The mask he wears is similar to Tim's, but it is cracked in two places and portrays a sad face. The large crack on the mask's left eye reveals a brown coloured eye. His skin is grey in colour, and his body is riddled with many injuries. Besides the typical scrapes and cuts as with his siblings, most if not all of his bones appear broken in some way. His spine seems to be severely bent, and the bone is exposed on his right elbow and left leg. His right knee bends at an odd angle, causing his foot to turn inward. His left foot is limp and he stands on his ankle.

Tom's clothing is torn and ripped for an unknown reason. His necktie seems to be cut and is pulled out of his shirt, and the lapels of his undershirt are disheveled. The undershirt's sleeves are ripped and dirty at the ends. His vest is torn at the end, exposing the undershirt, and the right pant leg is ripped, making it shorter than the other. Just like Tim, Tom wears a pair of saddle shoes and short socks.

Both Tom and Tim make coughing and wheezing sounds, but Tom's are more intense. Other sounds Tom makes are harrowed breathing, growling, and what seems to be laughing.

Tom's idle animation consists of him twitching and shuddering constantly. He makes loud cracking noises whenever he moves his limbs. He usually holds the same pose with his head limply lying on his right shoulder.

After Mask, Rattle, or Leg Brace is picked up

Tom's behaviour has barely changed in No Way Out.

Tom wears a more severely damaged mask, with loose stitches barely keeping it together. Brown straps coming from the mask are nailed to his head, securing the mask to his face. His hair is sparse, leaving him with some bald spots. Both of his eyes can be seen through his bloodstained mask. They are constantly closed, his left eye forcibly shut with stitches. Blood is constantly dripping from his mouth. His vest is now red, and his clothes are filthier and more ragged. His left shirt sleeve is completely ripped off. Curiously, he lacks the school crest patch on the vest.

Tom's wounds appear to be bloodier than usual. Trailing down his neck are strange blister-like markings. Continuing from them, the front of his shirt is covered with a crusty brown stain.

Tim and Tom make an appearance in an event that is tied to the achievement Sunday Worship.

Main Location: On a seat in the bus.

Main Location: Pinned on a tree near the Wood Shed.

Lillian: Ring around the rosie. Pocket full of posie. Ashes ashes... we all fall dead.

In-Game Description: Infant size metal leg brace similar to those used to treat children with polio in the early to mid 1900s.

Main Location: Under the bridge.

After placing one of Tom's items: the rattle, cracked mask, or leg brace.

An example of Tom rushing towards the player.

Tom as he appears in his Jumpscare.

Side view of Tom

Tom during one of his death animations.

The lower front of Tom

The lower back of Tom

Tom and Tim in their death animation.

Tom about to slash the player

After the No Way Out update, Tom's glitching effect changed. 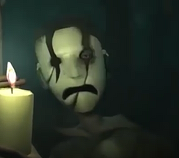 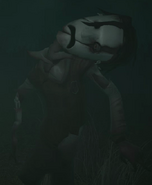 The twins creeping in during their death animation

Tom in the No Way Out trailer.

Tom in the No Way Out trailer.

Tom and Tim's death animation in the No Way Out trailer.

Tom walking away from a dying TBubber. Image has been rotated to show Tom upright.

Tom looking up at the player

Tom twisting his neck around to look at the player 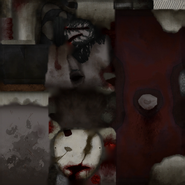 Tom's No Way Out Textures from assets 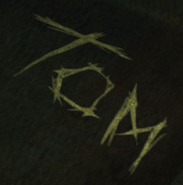 Tom's signature on the bus.

Tom's signature in the Counselor's cabin.

Tom (on the right) in the photograph evidence.

Tom's drawing from No Way Out. 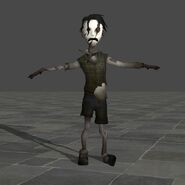 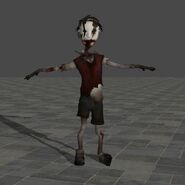 Tom's No Way Out Model Extracted

Wick and No Way Out Tom Strangling The Player

Tom's chase theme in No Way Out:

Community content is available under CC-BY-SA unless otherwise noted.
Advertisement